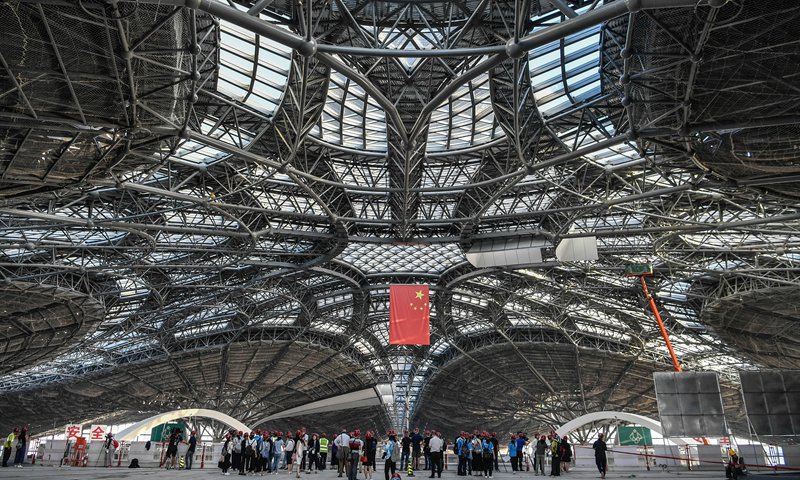 This photo shows part of the inside of the main terminal of the new Beijing airport under construction in the city’s Daxing district on Friday. The Civil Aviation Administration of China officially named Beijing’s new airport Beijing Daxing International Airport, which is expected to begin operations by September 30, 2019. Photo: IC

The Chinese aviation industry, which was hard hit by the coronavirus, is reviving with the coming eight-day holiday period expected to spur a new round of travel fever.

Estimates from airports around the nation indicate they expect to see a passenger travel peak during the National Day and Mid-Autumn Festival holidays, a sign that the sector is recovering.

“The civil aviation market will continue to strengthen during the holidays, and passenger traffic is expected to exceed the level of the same period last year,” Yu Zhanfu, global partner of Roland Berger’s strategy consultancy, told the Global Times on Tuesday.

The travel fever is also boosting the number of domestic flights.

China Eastern Airlines said it plans to operate 24,202 flights with 4.033 million seats during the holidays, and flying capacity will basically return to the same period last year.

Data from information provider VariFlight showed that the total number of flights during the coming holidays has returned to the level of 2019, indicating an ongoing industry recovery.

Airlines’ performances set a monthly record in August. Data from the Civil Aviation Administration of China showed a recovery of more than 80 percent, exceeding the January figure before the virus-induced lockdowns.