On payrolls report day, we always start this column with a rundown, as it’s one data point that typically sets the tone for the session—if not the coming month.

Not this time. With the bombshell news that the president and first lady tested positive for COVID-19, markets start today on the back foot, with major indices falling sharply in overnight trading. The news adds a new twist to what was already shaping up as a strange and highly uncertain election season, and also raises fears of how far the virus might have spread to people the president has spent time with, including his opponent.

That’s the scenario that might really shake up Wall Street, but there’s no sense putting the cart before the horse. Investors should consider caution at times like these, when volatility rises sharply and uncertainty rules the day. There’s no need to be a hero and be first in or out of a big move, and there’s no need to trade in large increments. One thing this news does do is reinforce how COVID-19 remains the number one story affecting the markets, and that’s not likely to change anytime soon even with the election looming.

Before the opening bell, sectors taking the biggest hit included airlines and other travel and “reopening” types of stocks as shutdown fears rose in the wake of the presidential news. Tech also took a step back. However, payrolls data could have an additional impact on trading.

The pre-opening slump from today’s biggest news story didn’t appear likely to get much better after investors saw the second-biggest news of the day.

Payrolls grew just 661,000 in September, well below Wall Street’s consensus of 800,000 and the previous month’s upwardly revised 1.49 million. Stocks extended their losses in pre-market trading following the data as the slower jobs growth raised fears about whether the wind-down of fiscal stimulus has started to weigh on the economy.

September’s jobs growth was by far the lowest since the recovery from last spring’s shutdown began. A sharp decline in government jobs had a lot to do with that and wasn’t a complete surprise after the shutdown recovery shifted normal seasonal government job gains into the summer months.

Unemployment fell more than expected, to 7.9%, the Labor Department said, but the report showed most of the new jobs were in lower-paying sectors like leisure and hospitality and retail trade. That’s good in one sense because it reflects more reopening of the economy. Still, investors awaiting improvement in higher-paying industries like construction and manufacturing aren’t seeing much of it.

Lack of steady improvement in the higher-paying industries probably helped explain why hourly wages barely rose in August. The average workweek by hours also hardly budged, but on the positive side, there was a nice drop in the number of people forced to work part-time for economic reasons. This could hint at the economy starting to act more normal. The number of those in the labor force who’ve stopped looking for a job didn’t improve, but didn’t get worse, either.

On the whole, this report paints a picture of an economy that’s improving by fits and starts and also still making reopening progress. It’s good to see upward revisions to the last two reports, which might mean we eventually see an upward revision to this one. But investors hoping for signs of companies really starting to put their muscle into major manufacturing or construction activities are likely to be disappointed.

Waiting For The Dough

There’s a 20th-century play about two guys who wait for days by the side of the road hoping a certain important person might show up (he never does). The market’s wait for a possible fiscal stimulus—now in its third month on Broadway—is a lot like that play, though we still don’t know the outcome.

No one can predict how the stimulus battle might end, especially considering today’s shocking development, but it wasn’t too encouraging to hear both sides so far apart and trading barbs late yesterday. Perhaps the weak employment growth could light a fire under negotiators, but we’ll have to wait and see.

That didn’t stop a nice rally in the small-cap Russell 2000 Index (RUT) yesterday, which arguably has more to gain from a domestically-oriented stimulus than its large-cap cousins. Today’s session could resemble yesterday’s, with action determined in part by cues from Washington.

The 10-year Treasury yield rose above 0.7% earlier this week, helping bank stocks. That rally faded by Thursday afternoon along with stimulus hopes, stifling some of the Financial sector enthusiasm. The yield fell back below 0.67% early Friday after news of the president’s diagnosis.

As noted yesterday, a few of the relationships remain out of whack as the weekend nears. That includes gold, which rose again yesterday despite early selling in the bond market and stronger equities performance. Some analysts tied the rise in gold to hopes for a U.S. stimulus, pointing out that if one actually happens it has a chance to increase inflation.

While you can’t necessarily fault the basic logic there, investors buying gold on chances of rising U.S. prices sound a little like someone in Antarctica buying a bathing suit on the chance of global warming. That’s not to say inflation can’t happen, especially with rates so low, but it’s probably a more distant problem right now.

One spark for stocks this week was the amazing consumer confidence number that came out Tuesday. That got followed by a decent ISM manufacturing index reading yesterday, a drop in new unemployment claims, and better than expected construction spending. Now the jobs data are in the books, and that just leaves University of Michigan sentiment and factory orders. Generally, U.S. manufacturing demand appears to be recovering, but Wall Street analysts look for August factory orders to rise just 1.2%, down from more than 6% in July.

Meanwhile, the forward price-to-earnings (P/E) level for the SPX remains historically high at 23,  research firm CFRA said, but a few SPX sectors are still trading at levels some investors might view as relatively low. These include Health Care at 16.7 and Financials at 14. However, having a low P/E most of this year hasn’t really helped the Financials much, because the fundamental picture has been such a weight. 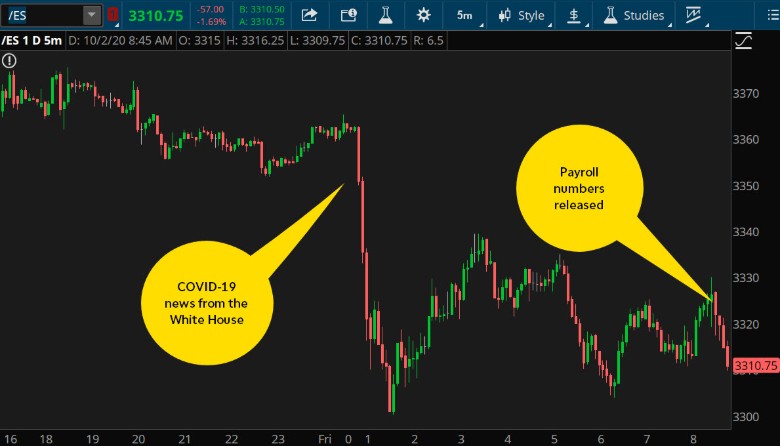 CHART OF THE DAY: WHEN NEWS STRIKES, FUTURES MARKETS ARE THERE. Like many news items and economic reports, news of a virus outbreak within the White House came in the off-hours, when markets were closed. The same can be said for the monthly employment report. When the stock market is closed, the futures market—including futures on the S&P 500 Index (/ES) are where the action unfolds in real time. Data source: CME Group. Chart source: The thinkorswim® platform from TD Ameritrade. For illustrative purposes only. Past performance does not guarantee future results.

Sector Check: The S&P Information Technology sector had another strong day Thursday and is up more than 5% over the last five sessions to lead all sectors during that time period. In the back row sits Energy, which is the only sector actually down this week. It got another kick in the tail Thursday as oil demand worries and concerns the stimulus chances might fly away helped send crude prices tumbling below $38 a barrel at times.

The sector also took a blow from news that Marathon Petroleum Corp (NYSE: MPC) plans to lay off 2,000 workers due to weak gasoline demand during the pandemic. The company is idling some of its refineries, MarketWatch reported.

Pressure continues to mount on some of the “cyclical” sectors like Industrials and Materials that benefited from stimulus hopes earlier this week. Their performance today, along with the RUT’s moves, could serve as a decent barometer of fiscal stimulus hopes.

Stay-at-Home Step Up: The so-called “momentum” stocks and Tech continue to look strong, but there’s been no repeat of the summer sizzle enjoyed by mega-cap companies like Apple Inc. (NASDAQ: AAPL) and Facebook, Inc. (NASDAQ: FB). AAPL, which often provides a sense of direction for the overall market due to its size and influence, is up about 9% from its September lows, but remains down 13% from all-time peaks recorded in August. By comparison, in July when AAPL took a brief 6% stumble, it rebounded 23% in the following two weeks. That kind of momentum isn’t happening now.

Instead, the “stay-at-home” stocks, like Peloton Interactive Inc (NASDAQ: PTON), Workday Inc (NASDAQ: WDAY), DocuSign Inc (NASDAQ: DOCU), and Trade Desk Inc (NASDAQ: TTD), have been leading the charge while FAANGs make smaller gains. This could reflect investors getting more worried about virus cases trending upward as fall and then winter loom, and also ideas that maybe the mega-caps don’t enjoy the same kind of growth potential since some of them dominate the markets they serve.

Talking Technicals: Lost amid all the virus, data, earnings, and stimulus hoopla this week is an interesting technical development for the S&P 500 Index (SPX). We’ve mentioned how the 50-day moving average near 3357 has been like a magnet lately both when the SPX is above and below it. That’s still the case, but when you pull back and take a broader look, it’s now becoming clear that the SPX managed to make a major test of what research firm CFRA calls “key” longer-term support between 3212 and 3259 and bounced off of that level pretty convincingly. Today could end up being another test of that support if early weakness related to the presidential diagnosis picks up steam.

Before this morning’s virus news, the SPX appeared to be making a run at what CFRA sees as resistance in an area between 3354 (near the 50-day) and 3428, a point the SPX bumped up against and failed to pierce in a small mid-September rally. A move above that, CFRA said, is necessary to turn the near-term bias back to bullish. The SPX managed to bounce off of the 50-day average again yesterday.

Photo by Suzy Brooks on Unsplash

© 2020 Benzinga.com. Benzinga does not provide investment advice. All rights reserved.