An MP has apologised for travelling to London to debate the coronavirus response in Parliament after experiencing Covid-19 symptoms before testing positive and returning to Scotland.

The SNP suspended Margaret Ferrier after she acknowledged on Thursday that “there is no excuse for my actions” and said she had reported herself to police after revealing her journey while positive with the virus.

Party leader Nicola Sturgeon condemned the “utterly indefensible” behaviour amid calls for the MP to resign, including from within her own party.

Ms Ferrier said she took a test on Saturday afternoon after experiencing “mild symptoms”, meaning she should have self-isolated, before travelling by train to London on Monday.

“This was wrong, and I am very sorry for my mistake,” the MP for Rutherglen and Hamilton West said.

Ms Ferrier spoke in the coronavirus debate in the House of Commons on Monday and, by her account, tested positive for Covid-19 that evening. She did not make clear whether she received the result before or after she spoke.

“I travelled home by train on Tuesday morning without seeking advice. This was also wrong and I am sorry,” she said.

“I have been self-isolating at home ever since.”

Police Scotland said the MP informed them of her behaviour on Thursday.

The Commons said that the MP did not inform her party whip until Wednesday afternoon and that one person has been identified as a close contact and told to self-isolate.

Ms Ferrier would face a £1,000 fine for a first-time offence of breaching self-isolation rules under a law that came into force on the day of her positive test.

“Despite feeling well, I should have self-isolated while waiting for my test result, and I deeply regret my actions,” Ms Ferrier said.

“I take full responsibility and I would urge everyone not to make the same mistakes that I have, and do all they can to help limit the spread of Covid-19.” 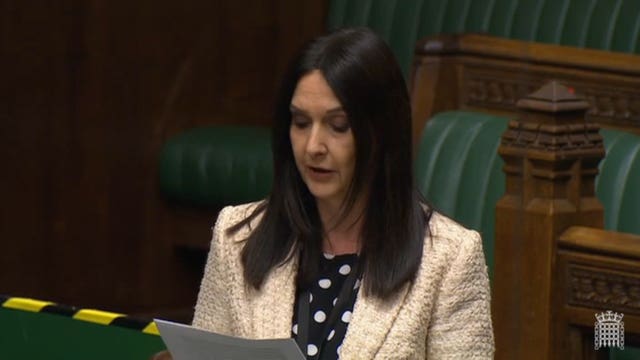 Ian Blackford, the SNP’s leader in Westminster, said he was suspending the whip from Ms Ferrier having spoken to the MP.

Ms Sturgeon welcomed the move and added: “It’s hard to express just how angry I feel on behalf of people across the country making hard sacrifices every day to help beat Covid. The rules apply to everyone and they’re in place to keep people safe.”

But David Linden, the SNP MP for the Glasgow East constituency neighbouring Ms Ferrier’s, called for her to go.

He told BBC Question Time her behaviour is “utterly inexcusable”, adding: “I don’t think her position is tenable and she should resign.”

“We are the middle of a pandemic – travelling hundreds of miles on public transport having tested positive for this deadly virus isn’t a mistake, it’s complete disregard for everything we are fighting against,” Mr Ross said.

“To breach the rules twice is simply unforgivable, and has undermined all the sacrifices made by her constituents,” the Labour MP added.

I have spoken with @MargaretFerrier this evening who fully accepts that what she did was wrong. Margaret will be referring herself to the parliamentary standards commissioner as well as the police. I am tonight suspending the whip from Margaret. https://t.co/1bCst4r5Pu

Ms Ferrier previously called on the Government to investigate Mr Cummings, Boris Johnson’s chief adviser, for potential breaches of the rules over his trip to Durham.

She criticised the Prime Minister for standing by his aid, and accused Mr Cummings of “undermining public trust in lockdown rules”.

On Monday, Ms Ferrier gave a four-minute speech in the Commons from 7.15pm and focused on the “economic health” of her constituents, calling for greater financial support.

Rail staff have worked throughout this pandemic to make sure the network could serve the public. We’ve worked day in, day out to keep our railway as safe as possible for passengers and staff. For an MP to get on a train knowing she has Covid-19 is both dangerous and disgraceful. https://t.co/AOK3n3C0wx

Train drivers’ union Aslef said: “For an MP to get on a train knowing she has Covid-19 is both dangerous and disgraceful.”

The Glasgow-born politician, 60, first entered Parliament in 2015 taking the seat in South Lanarkshire from Labour. She lost in 2017 but won the constituency back in last year’s snap election.

A Police Scotland spokesman said officers were liaising with colleagues in the Metropolitan Police.

A Commons spokesman said: “Margaret Ferrier informed the SNP whip that she was Covid-19 positive on Wednesday afternoon, the Speaker was informed and the House authorities immediately took all necessary steps in line with their legal obligations and PHE (Public Health England) guidance.

“On the basis of the information supplied to the contact-tracing system, only one individual has been identified as a close contact in relation to this case and is now self-isolating.”