Yet again, Delta Air Lines posted massive quarterly losses — and the company is warning investors “it may be two years or more” for air travel demand to return to normal. © Christian Petersen/Getty Images MARANA, ARIZONA – MAY 16: Decommissioned and suspended Delta and jetBlue commercial aircrafts are seen […]

Yet again, Delta Air Lines posted massive quarterly losses — and the company is warning investors “it may be two years or more” for air travel demand to return to normal.

© Christian Petersen/Getty Images
MARANA, ARIZONA – MAY 16: Decommissioned and suspended Delta and jetBlue commercial aircrafts are seen stored in Pinal Airpark on May 16, 2020 in Marana, Arizona. Pinal Airpark is the largest commercial aircraft storage facility in the world, currently holding increased numbers of aircraft in response to the coronavirus COVID-19 pandemic. (Photo by Christian Petersen/Getty Images)


The airline posted a $2.1 billion operating loss in the third quarter, excluding special items like charges for buyout packages for employees who voluntarily left the company and early retirement of aircraft. Including those items, its net loss topped $5 billion for the second consecutive period.

The third-quarter loss was larger than forecast by Wall Street analysts, and Delta shares fell 3% in morning trading on the news.

Analysts expect total losses among US airlines to top $10 billion for last quarter, as the pandemic continues to fuel a huge drop in demand. Delta is the first US airline to report results for the quarter.

Delta’s revenue also fell 79% compared to the year-ago period. Bad as that is, it’s an improvement from the 88% drop in the second quarter.

Business travel, the more lucrative part of the airline’s bookings, has been slower to recover than leisure — especially during the summer travel season. At the end of the quarter, corporate travel volume was only 15% of what it was a year earlier.

“I don’t think anybody knows,” he added. “My sense is that we could be looking at anywhere from 10% to 20% reduction in the next couple of years when we get to that new normal of business travel.”

But Bastian said he’s not yet convinced that video conferencing will cause permanent, lasting damage to business air travel.

“Every crisis that I’ve been part of — and it’s been a lot of crises over 20-plus years — the first thing that people always talked about was … the death of business travel and technology was going to replace the need for travel,” he said. “And every single time, business travel has come back stronger than anyone anticipated.”

Delta executives said they are seeing some hopeful signs in bookings for Thanksgiving and the end-of-the-year holiday travel season.

But the airline still anticipates revenue in the final three months of the year will be down 65% to 70% compared to last year.

Delta had hoped to be able to get to get its cash burn rate to break-even by 2020’s end. But the company said Tuesday it now expects to be burning through $10 million to $12 million of cash a day at year’s end. The company won’t be bringing in as much cash as it spends until spring 2021.

Middle seats likely to be filled again in 2021

Delta continues to limit capacity on its planes, leaving open the middle seats in coach to provide more distancing between passengers. Bastian said he expects that practice will end sometime next year, but no firm timeline has been set.

“We continue to watch it,” he said. “Obviously, it’s going to be conditional on consumer sentiment and confidence in air travel. I think as each week goes by … the confidence is improving.”

“We’ve got a lot of studies coming out from experts of the safety of air travel,” Bastian added. “And sometime in the first half of next year, I have no doubt, we will be [lifting] those caps.”

Airlines that received federal assistance earlier this year were blocked from instituting involuntary job cuts through September 30. Delta rivals United and American Airlines each cut more than 10,000 jobs on October 1.

Delta has not cut staff, though it may lay off 1,700 pilots on November 1 — the only significant group of employees at the airline represented by a union. It is still in negotiations with that that union to avoid the cuts.

“We’ve given … the union, a lot of different options. And I’m hopeful we can reach a resolution, but I’m not trying to suggest or forecast that,” said Bastian.

He said he believes the airline will be able to avoid other layoffs, as 18,000 employees took voluntary buyout or early retirement packages, while another 12,000 are still on voluntary unpaid leave.

Delta also had a more significant share of employee compensation tied to profit sharing than at rival airlines.

Last year it paid a record $1.6 billion to its employees, an average of about two extra months of pay. But with the losses Delta and other airlines have had this year, there will be no profit sharing.

Wed Oct 14 , 2020
Blackpink’s Jisoo, clockwise from bottom left, Rosé, Jennie and Lisa in “Light Up the Sky.” (Netflix) Blackpink’s debut album hasn’t even been out for two weeks, and already the members of this K-pop girl group have the end in mind. In fact, Jennie, Jisoo, Rosé and Lisa were pondering their […] 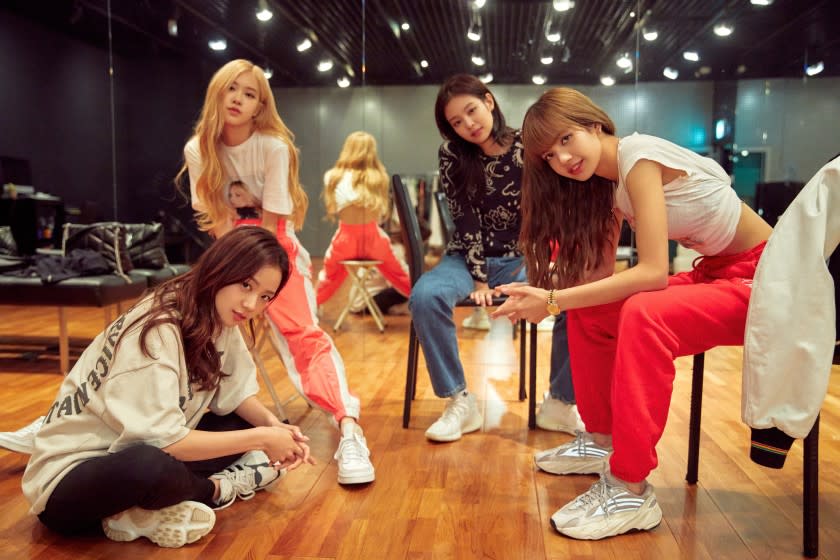