SINGAPORE/KUALA LUMPUR — Singapore and Malaysia, closely connected neighbors that have both been severely damaged by COVID-19, are eager to jump-start their economies. But just as the former appears to be turning a corner and moves to accelerate its reopening, the latter is scrambling to contain another wave of infections.

Their diverging fortunes highlight the persistent challenge of dealing with this virus and the difficulty of balancing health and economic imperatives.

Singapore on Saturday confirmed seven new coronavirus cases, marking the 10th consecutive day with fewer than 20. The low numbers are encouraging the city-state to reestablish links with the world — links the trade and travel hub needs to sustain its economy.

On Thursday, Singapore began allowing general travelers from Vietnam and Australia, excluding the hard-hit state of Victoria. They follow Brunei and New Zealand on Singapore’s list of greenlit countries of origin for inbound visitors.

The lifting of the border restrictions for the four countries is not reciprocal, and the actual number of people entering the city-state is expected to remain limited for the time being. Yet, Singapore believes these unilateral reopenings are still meaningful.

“It is like a standing invitation,” Transport Minister Ong Ye Kung said in parliament on Tuesday. “Although the other countries are not ready to lift their restrictions now, Singapore can be top of mind when they are ready eventually.” Moreover, Ong said Singapore will start discussions with low-risk countries and regions on what it calls “air travel bubbles” for general travelers. For business travelers, the city-state has already set up reciprocal bubbles with China, Malaysia, South Korea, Japan and Brunei — one by one since June.

Earlier in the pandemic, the virus tore through Singapore’s densely packed dormitories for migrant workers, driving daily new cases to over 1,400 in April. But through testing of about 300,000 such workers, coupled with nationwide safety measures and expanded testing capacity, officials have tamped down infections.

On Oct. 3, the case count dropped to six, the lowest since March.

“After a most difficult past several months, the COVID-19 situation in Singapore has stabilized, and large parts of the economy have resumed operations,” Deputy Prime Minister Heng Swee Keat said in parliament last Monday.

In contrast, in Malaysia, new COVID-19 cases have jumped in the last two weeks after three months of relative stability. The country had recorded 10,219 total positives from the start of the pandemic to Sept. 20. In the roughly three weeks since, it has logged nearly half that number — almost 5,000 cases — to reach 15,096 on Saturday.

Daily cases remain in the triple digits, after a record 691 were confirmed this past Tuesday.

Politicians have been blamed for causing the spike, as they ignored precautionary measures during campaigning in the Sabah state election held on Sept. 26.

The outbreak in the eastern state began among detainees in camps for workers who had entered the country illegally, and later spread throughout the state. Numerous politicians, including Prime Minister Muhyiddin Yassin, traveled to Sabah during the race.

Zulkifli Mohamad, the minister of religious affairs, is believed to have been infected there. Muhyiddin has tested negative but he is in quarantine at home — as are seven ministers and six deputies — after being in contact with Zulkifli. A doctor in a protective chamber tests a man for COVID-19 in Subang Jaya, Malaysia, on Oct. 8.

In an address to the nation on Tuesday, the prime minister acknowledged the risks but insisted the country cannot afford another lockdown like the monthslong movement control order that halted the economy earlier this year.

Singapore and Malaysia are among the hardest-hit economies in Asia, with second-quarter gross domestic product falling 13.2% and 17.1%, respectively, on the year. The steep falls were partly due to the lack of international tourists: Both countries closed their borders to the world in March.

Since Singapore and Malaysia rely heavily on each other economically — with thousands of workers living in Malaysia and normally commuting to the city-state — they reopened their mutual borders in August. This allowed some workers to return to their jobs and made essential business trips possible, under careful restrictions.

Otherwise, though, Malaysia remains cautious. Even before the latest outbreak, tourism minister Nancy Shukri told Nikkei Asia that the country was likely to remain closed to tourists into 2021.

Noor Hisham Abdullah, the director-general of Malaysia’s health ministry, in late August raised concerns about recurring spikes in “countries that once upon a time were the gold standard, like Korea,” and warned against reopening too soon.

“If they are having challenges, we need to prepare for the worst and hope for the best,” he said. “So we need not ease our borders, but tighten them further.”

But Singapore, which is due to release its preliminary third-quarter GDP on Wednesday, sees an urgent need to get people flying in and out again. 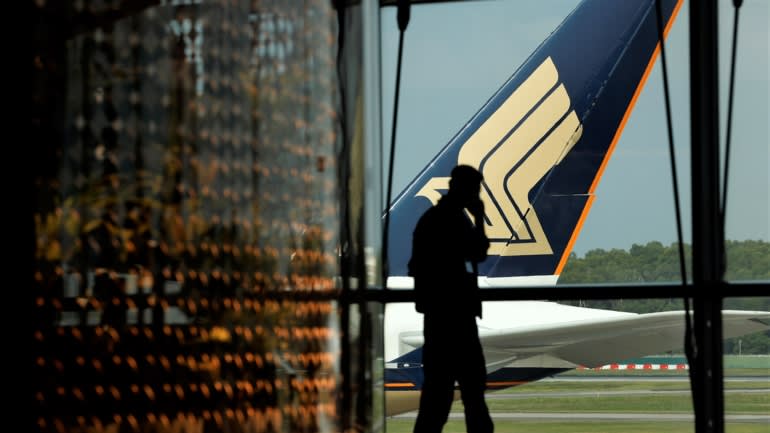 A Singapore Airlines plane at the city-state’s Changi Airport: The carrier last month announced it would cut about 4,000 jobs, including group companies.

The tiny country counted 19.1 million visitor arrivals last year, more than triple its population of 5.7 million. “The longer our borders remain closed, the greater the risk of losing our air hub status, and our attractiveness as a place to invest, and to create jobs because of those investments,” Ong warned.

Singapore’s overall jobless rate rose to 3.4% in August, compared to 2.3% in December. Underscoring the danger to the economy, flag carrier Singapore Airlines last month announced it would cut about 4,000 jobs, including group companies.

Economists expect a 6.8% year-on-year decline in Singapore’s July-September GDP, according to the median forecast compiled by Refinitiv — marking a third consecutive quarter of contraction.

While some sectors, such as electronics manufacturing, show signs of recovery, “the tourism sector … remains on its knees,” Capital Economics wrote in a report issued Oct. 2.

As Malaysia’s Noor warned, however, a quick reopening carries risks.

European countries like France and Spain have seen a resurgence of COVID-19 in recent weeks, forcing them to impose restrictions again. In general, Asian countries and territories have been more guarded, with over 60% of them remaining completely closed to general travelers as of Sept. 1, according to the World Tourism Organization.

Noting the trade-off between the economy and health, Ong stressed that Singapore will reopen its borders “step by step, carefully, safely, steadily.”