The Wolf of Snow Hollow Review

Jim Cummings’ latest feature “The Wolf of Snow Hollow” undoubtedly cements the multi-hyphenate as the future of independent filmmaking, and perhaps filmmaking in general. Following Cummings’ festival hit “Thunder Road,” which was adapted from his 2016 short, the new film shows the writer-director’s desire to operate in several genres – sometimes all at once – while he continues to find his footprint in the industry. “The Wolf of Snow Hollow,” uneven as it can sometimes be, shows Cummings reaching for bigger ideas and a larger scope than his previous movie.

“The Wolf of Snow Hollow” opens to an ominous score with a snowy backdrop. The image immediately provokes the unsettling thought of the Torrance family driving up winding hills on their way to the Overlook Hotel. The mood is set. The atmosphere is chilly, and we are drawn into the world Cummings has crafted as the film’s writer. PJ (Jimmy Tatro) and his girlfriend Brianne (Annie Hamilton) are enjoying a nice vacation together in Snow Hollow, when one night something gruesome happens to Brianne. It remains unexplained. People keep dying throughout the town and rumors start to fly that a wolf could possibly be killing everyone, so it’s up to Officer John Marshall (Cummings) to lead the case. He’s motivated in part by the hope of making sheriff, a position currently held by his ailing father (the late Robert Forster). 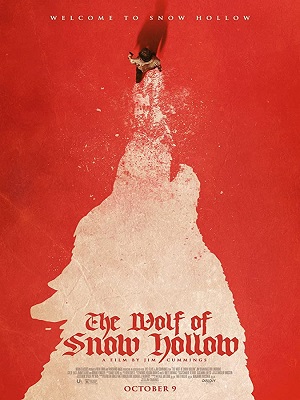 While responsible for investigating the murder cases that keep popping up, John is also trying to manage some sort of normalcy and civility in his personal life. He is divorced and shares custody of his college-bound daughter Jenna (Chloe East), who wants to be a normal teenager, even when her father’s job makes its difficult and makes him a bit absent from her.

Cummings’ performance feels like an echo of what he achieved in “Thunder Road.” The characters he plays in both are cops struggling to find some harmony in their personal lives. Cummings’ has a lot of ground to cover here: John is battling addiction demons, coping with the likely loss of his father, managing the police investigation, and trying to keep his daughter from completely rebelling against him. That’s a lot of emotional territory to navigate in a 90-minute film, and sometimes “The Wolf of Snow Hollow” feels a bit overstuffed and loses track of plot points. In trying to do more, Cummings’ film occasionally feels unstable.

Even so, the genre-mashup provides plenty of entertainment to please the drive-in crowd on a dark Saturday night. The movie’s journey is more fun than the ultimate outcome, but between the laughs and some gruesome images, “The Wolf of Snow Hollow” knows exactly what target its trying to hit and, more or less, manages to hit it.

“The Wolf of Snow Hollow” will be in theaters and on demand starting Oct. 9.