JTA — Caroline Wellbery’s father, the late German literary scholar Egon Schwarz, fled Austria with his family after the Nazis annexed the country in 1938, when he was 15. Schwarz ended up studying in the United States and then teaching at Harvard and Washington University in St. Louis, Missouri.

His escape was “a deeply life-changing event for him, and it permeated our household for the entirety of our lives,” said Wellbery, a physician and medical educator at the Georgetown University School of Medicine who lives in Maryland.

Schwarz didn’t feel animosity toward the nation that had ousted him, Wellbery said. Still, he always had a desire to reconnect with his ancestral roots.

Now Wellbery, who turns 67 this month, is trying to do that for him by applying for Austrian citizenship under a new amendment to the country’s citizenship law that went into effect Tuesday.

“It seems like there was a wish to bring the story to some kind of closure, and that is part of why I am interested in pursuing this,” she said.

Wellbery is among thousands of Jews around the world expected to apply. Adopted last year by the Austrian National Council, the amendment allows those who were persecuted by the Nazi regime and their direct descendants (including children adopted as minors) to obtain Austrian citizenship without giving up their current passports — that’s still mandated of new Austrian citizens outside of this law.

It applies not only to citizens of Austria proper and successor states of the former Austro-Hungarian monarchy, but also to stateless persons who had a primary residence in Austria but had to leave for safety by May 15, 1955, a decade after the war ended.

The amendment is “in line with Austria’s ongoing endeavor for reconciliation with all those who suffered under the totalitarian Nazi regime in Austria,” Austria’s US Embassy said in a statement.

Interest is high, says attorney Daniel Gros of Vienna, who is hearing from “friends of friends” all over the world — but especially from the United States, Israel and the United Kingdom. He is advising applicants as a consultant with the Vienna law firm of Lansky, Ganzger + Partner.

There is a special twist for British Jews who were not thrilled about Brexit, he added: They will be able to have both British and EU passports, the latter being extra valuable for travel throughout Europe once the UK fully severs ties with the EU.

The passport is additionally attractive for some Americans, like Wellbery’s family members, who she said are particularly distressed by the political and social chaos in the US, mostly fueled by President Donald Trump.

“If there is a repeat of the last four years, this will pique the interest of the family,” she said. 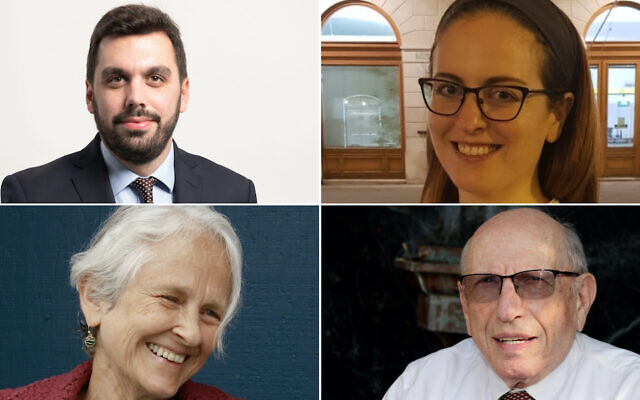 Clockwise, from top left: Daniel Gros, a Jewish attorney in Vienna advising Jews on how to apply for Austrian citizenship; and Elana Dunn-Rennert, Paul Burg and Caroline Wellbery, who are all applying. (Courtesy of Gros, Dunn-Rennert, Burg and Wellbery via JTA)

Zeev Maayan, 33, is an Israeli who has successfully applied for Portuguese and Hungarian citizenship based on his ancestry in both countries. He’d like to add Austria to that list.

“In Israel, getting a foreign citizenship is like a national sport,” he said. “People want to have other options. It also upgrades you socially, and you can travel in certain countries without worrying.”

But even the experienced Maayan was surprised by the quick response to his new Hebrew-language Facebook group aimed at crowdsourcing information about the Austrian application process. Within days he had more than 100 Israeli members, most of them asking technical questions about how to apply: “Do I need to translate this, or where did you find the documents of your ancestors?”

Oskar Deutsch, president of the Jewish Community Vienna and the Federal Association of Jewish Communities in Austria, said many people have contacted him already, too.

“I am very happy about it,” said Deutsch, who was consulted on the law by Austria’s Foreign Ministry.

Still, he doubts the measure will have much impact on the size of the community, which has about 8,000 members, mostly in Vienna, with some in the cities of Linz and Graz.

During the coronavirus pandemic, “people should not and will not travel very much,” Deutsch said. “They have other problems than to decide where to live.”

Gros is much more optimistic: He expects “thousands and thousands of applications.”

“I believe this will completely change Jewish life in Austria,” said Gros, 33, who was born in Germany to a family from the former Yugoslavia. “Even if only a small percentage bring their families, a lot of things will change because we will have Jewish people from all over the world contributing to the community.”

According to the US Holocaust Memorial Museum, when Austria was annexed by Germany in 1938, there were about 192,000 Jews living there, nearly 4% of the total population. By December 1939, three-quarters had emigrated, and about 65,000 Austrian Jews were murdered in the Holocaust. 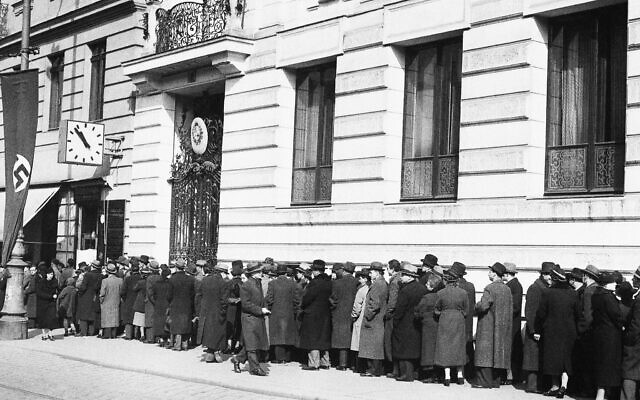 But Austria has been much slower to confront its dark Nazi past than Germany and other European countries. For decades after the Holocaust, successive Austrian governments adhered to a line that painted Austria as “the first victim” of Nazism, ignoring the mobilization of its society and infrastructure of state for the Nazi war machine after German annexation.

Whereas German society, its laws, judiciary and other institutions had been de-Nazified following World War II, few similar actions were taken in Austria. An official apology for being “henchmen in the Nazi dictatorship” came in 1994, and critics allege that it is still overly stingy with Holocaust restitution funds and in its handling of a large number of art restitution claims.

Today, Gros sees the state as committed “to somehow face its history, to somehow give the next generations something that was taken away from their grandfathers and grandmothers.” Austria’s young conservative chancellor, Sebastian Kurz, has boosted ties between his country and Israel in recent years, citing the country’s Nazi collaboration as part of his motivation.

German citizenship has been open since 1949 to German Jews who survived the Nazi era and their descendants. Other European countries have made it possible for Jews to reclaim citizenship denied to their forebears, with some limitations. Spain enacted a law in 2015, meant as an atonement for the Inquisition — the 15th-century persecution and expulsion of Jews. Sephardic Jews with demonstrable roots in Spain and knowledge of the Spanish language could receive passports through October 2019 (in May, Spain extended the window for one year due to the coronavirus crisis). Portugal has a similar law without a time limit and without a language requirement.

The Austrian citizenship will be more practical for American-Israeli Elana Dunn-Rennert, 35, who already lives in Vienna with her husband and their three children but has to renew her visa regularly. She took a circuitous path to the country of her roots: Her maternal grandmother fled Graz in 1938 at age of 3 with her family, ending up in the US.

Decades later Dunn-Rennert, then 6 years old, moved with her parents from the US to Israel. She eventually met her husband there, and they moved to Austria.

She’s planning to apply for citizenship, following instructions sent out by the Jewish leader Deutsch.

“Before, I would have had to give up my Israeli and American passports, and that’s not something I ever wanted to do,” said Dunn-Rennert, who teaches at the Vienna Jewish Community organization’s kindergarten. 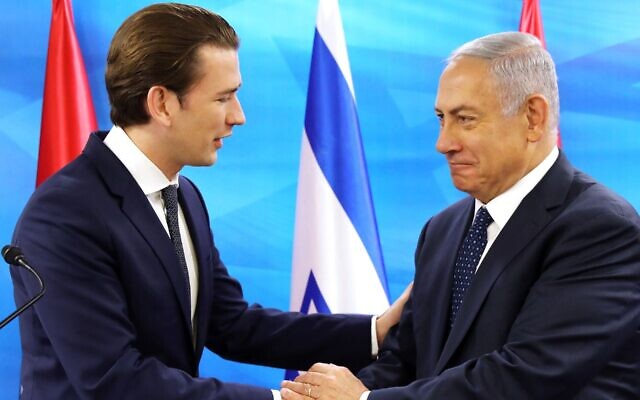 She has to get documents proving she is related to her grandmother, who died last year. Already the archives of the Austrian Jewish Community organization has provided some information on her ancestors.

True, “reclaiming my Austrian heritage is a practical thing for me,” she said. “But … it’s also kind of like, ‘They wanted to get rid of us, but we are still here.’”

US citizen Paul Burg, 87, sees getting an Austrian passport as the ultimate triumph. Born in Czernowitz (today Chernivtsi) in 1933, his family survived the war along with some 20,000 other Jews thanks to an intervention by Traian Popovici, the city’s wartime mayor.

But the changing status of Czernowitz makes his claim a little tricky. Czernowitz was part of the Austro-Hungarian Empire until it dissolved in 1918, then became part of the Kingdom of Romania. After World War II, Ukrainian forces took it over, and most of its Jews fled to Israel. Since 1991, it has been part of Ukraine.

Still, the fact that his father was born there when it was part of the Austro-Hungarian Empire makes Burg eligible for citizenship under the new regulation. He is receiving advice from Gros and his Vienna law firm.

“I want to be part of the struggle against anti-Semitism and anti-Zionism in Europe,” Burg said.

US-born Israeli lawyer Deborah Opolion’s father was born in Vienna in 1932. In the late 1970s, he returned there with his family as an American diplomat. Opolion, then a teenager, fell in love with the city, though she knew that “people who might have been Nazis were still alive. It was a very staid, serious, somber sort of a place.”

Now 55, she has visited Vienna often with her teenage daughter. To her, the atmosphere has changed a lot since she was a girl.

“There is a more cosmopolitan feeling, a younger and fresher, more open vibe,” she said. “I don’t know if I would be applying for citizenship” if it were the same old Austria.