The New York Times has released a report, the fourth in its series, based on President Donald Trump’s federal tax returns, illustrating how the paper says the president turned “his own hotels and resorts into the Beltway’s new back rooms, where public and private business mix and special interests reign.” […]

The New York Times has released a report, the fourth in its series, based on President Donald Trump’s federal tax returns, illustrating how the paper says the president turned “his own hotels and resorts into the Beltway’s new back rooms, where public and private business mix and special interests reign.”

© Drew Angerer/Getty Images, FILE
President Donald Trump walks to the White House residence after exiting Marine One on the South Lawn on June 25, 2020, in Washington.


Trump attended 34 political fundraisers at his hotels and resorts that brought in $3 million in revenue, the Times reported.

“Sometimes he lined up his donors to ask what they needed from the government,” the Times said.

Brian Ballard, a Florida lobbyist and confidant of the president, joined Trump’s Mar-a-Lago resort in Florida midway through Trump’s presidency, the paper reported. Associates later said he did this because the president wanted him to “ante up,” the Times said.

Ballard dismissed any accusations questioning his membership at Mar-a-Lago, the Times reported, and called the idea, in part, “ridiculous.”

© Drew Angerer/Getty Images, FILE
President Donald Trump walks to the White House residence after exiting Marine One on the South Lawn on June 25, 2020, in Washington.


More than 200 companies, special-interest groups and foreign governments patronized Trump’s properties, benefiting the commander-in-chief and his family at a time when his personal business empire was under financial strain, the Times found.

Sixty customers with interests before the administration brought the Trump family $12 million in business in 2017 and 2018, and “almost all saw their interests advanced, in some fashion, by Mr. Trump or his government,” the Times said.

More than 70 advocacy groups, businesses and governments held events at Trump properties that were previously held elsewhere, or created new events to hold at Trump’s establishments. More than 100 companies that wanted something from the federal government patronized his properties, the Times reported.

Despite Trump putting his assets in a trust controlled by his sons, as a result of winning the presidency, and wanting to avoid appearances of conflicts of interest, Trump was frequently updated on how his properties were doing and would ask workers when visiting the clubs how things were going, the Times reported.

© Brendan Smialowski/AFP via Getty Images, FILE
President Donald Trump walks to Marine One on the South Lawn of the White House Dec. 21, 2017, in Washington.


Charitable groups with business before the administration reported spending $3.3 million on events at Mar-a-Lago from 2017 to present, the Times said.

Over Trump’s presidency, Mar-a-Lago’s in-house magazine announced nearly 100 new members, a number of whom had significant business interests in Washington, the Times said.

Tax records from 2016, according to the Times, show initiation fees that year delivered close to $6 million in revenue.

On New Year’s Eve, Trump joked about raising fees for all the “fake people” trying to join. The next day, fees jumped to $200,000, according to the report.

The Times reported that foreign actors were able to use Trump’s Washington, D.C., hotel, and the ability to meet with Trump and other administration officials, as a way to signal back home a sense of closer ties to the U.S., even sometimes leading to policy and business wins for those who visited. The Times identified more than 20 foreign officials, politicians and businesses or groups closely affiliated with governments abroad that held events at Trump properties or paid for rooms there.

The week of Trump’s inauguration, Romanian politician Liviu Dragnea encountered Trump in his Washington hotel and secured a meeting with the president-elect, the Times reported. Dragnea posted pictures of the meeting on Facebook, implying there was a promise of closer ties between their two countries, the Times reported.

California businessman and new Mar-a-Lago member Elliot Broidy had arranged the impromptu introduction and would later seek to win business from the Romanian government and others, the Times said.

In 2017, Broidy organized a reception at the Washington hotel honoring the Romanian defense minister and a top general who oversaw the kinds of programs he was eyeing for business, the paper reported.

Broidy and his team invited “many important VIPs” including the ambassador to Romania, Commerce Secretary Wilbur Ross and Secretary of the Interior Ryan Zinke, according to emails the Times says it obtained through a public-records request. Ross did not attend, but Zinke and the ambassador did, according to the report.

Five months later, Broidy’s company signed a cooperation agreement with Romania’s state-owned defense firm, laying the groundwork for contracts worth as much as $200 million. The contracts never were awarded, the Times said.

Dragnea was convicted of abuse of office while Broidy’s arrangements with foreign clients came under federal investigation, the Times reported. On Thursday, it was revealed Broidy had been charged with conspiring to violate foreign lobbying laws in a case unrelated to Romania, according to a Times report on Thursday.

The first installment of the New York Times series, which was published on Sept. 27, reported that Trump paid $750 in federal income taxes in 2016 and 2017.

“I paid many millions of dollars in taxes but was entitled, like everyone else, to depreciation & tax credits,” the president tweeted on Sept. 28.

Sun Oct 11 , 2020
Text size U.S. President Donald Trump (R) and first lady Melania Trump on stage after the first presidential debate between Trump and Democratic presidential nominee Joe Biden, on Sept. 29, 2020. Getty Images The news that Donald Trump tested positive for coronavirus is resonating throughout the world, because he is […] 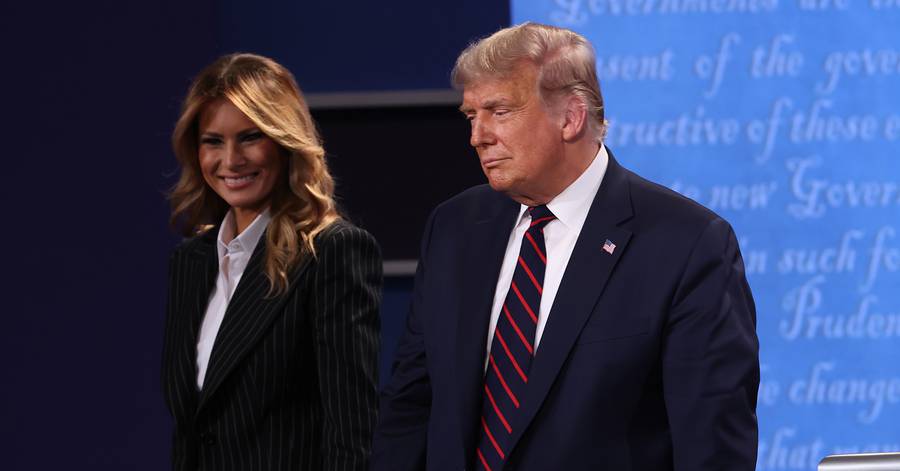